When I run a logistic regression on infant mortality with a categorical covariate, say season, with four categories, (‘spring’, ‘summer’, ‘fall’, ‘winter’), with the following data (400 births),

I get this output from R, with winter as reference category:

Hmm, interesting, the smallest p-value is around 1-2%. But I think I want spring as reference category when I present it.

Oops, what happened to my small p-value?

The answer is that in each case we only reported three contrasts (pairwise comparisons), but there is a total of six contrasts. In the second case we are missing the contrast with the largest difference, ‘fall’ vs. ‘winter’.

Our conclusions shouldn’t depend on how we code our data, or what reference category we choose. We need the likelihood ratio test (LRT):

This result is invariant under reparametrization. If we a priori wanted to compare winter and fall, we could eliminate cases with season equal to spring or summer and get:

2.1 A related problem: The Hauck-Donner effect

This difference is nothing much to worry about, but worse is that in some cases, the Wald p-value may be seriously wrong. One example, with the data frame dati:

With this simple data frame, a Cox regression gives the result:

As you see, the Wald p-value is 0.304, which is far from the LRT, 0.001. The LRT is the correct one: The Wald is an approximation of the LRT, and it sometimes goes seriously wrong (Hauk and Donner 1977). Essentially, a very large Wald p-value in nonlinear models (logistic, Poisson, Cox regression) means one of two things: (i) Nothing indicates that the corresponding parameter is non-zero, or (ii) It is almost certain that it is not zero. Can we live with that?

This was a side track, but a very important one. I have discussed it in a previous post.

2.2 Back to the main track: A simulation study

Back to the “real business”. I simulated situations with a categorical variable with different numbers of levels. The null situation is under investigation, and the real significance level will be compared to the nominal, which I choose to be 5%. For each No. of levels, 2, …, 12, ten thousand replicates were made of an experiment with 100 births at each level and the probability of death constantly equal to 10% (a reasonable number in nineteenth century Västerbotten). I have tried other combinations of sample sizes and true death probability, but the general conclusion does not change.

The number of levels is increasing from two to twelve, and for each I estimate the probability of finding a “significant” contrast. Since everything is done under the null hypothesis of no differences, we hope this probability to be below 5%. This is what happens: 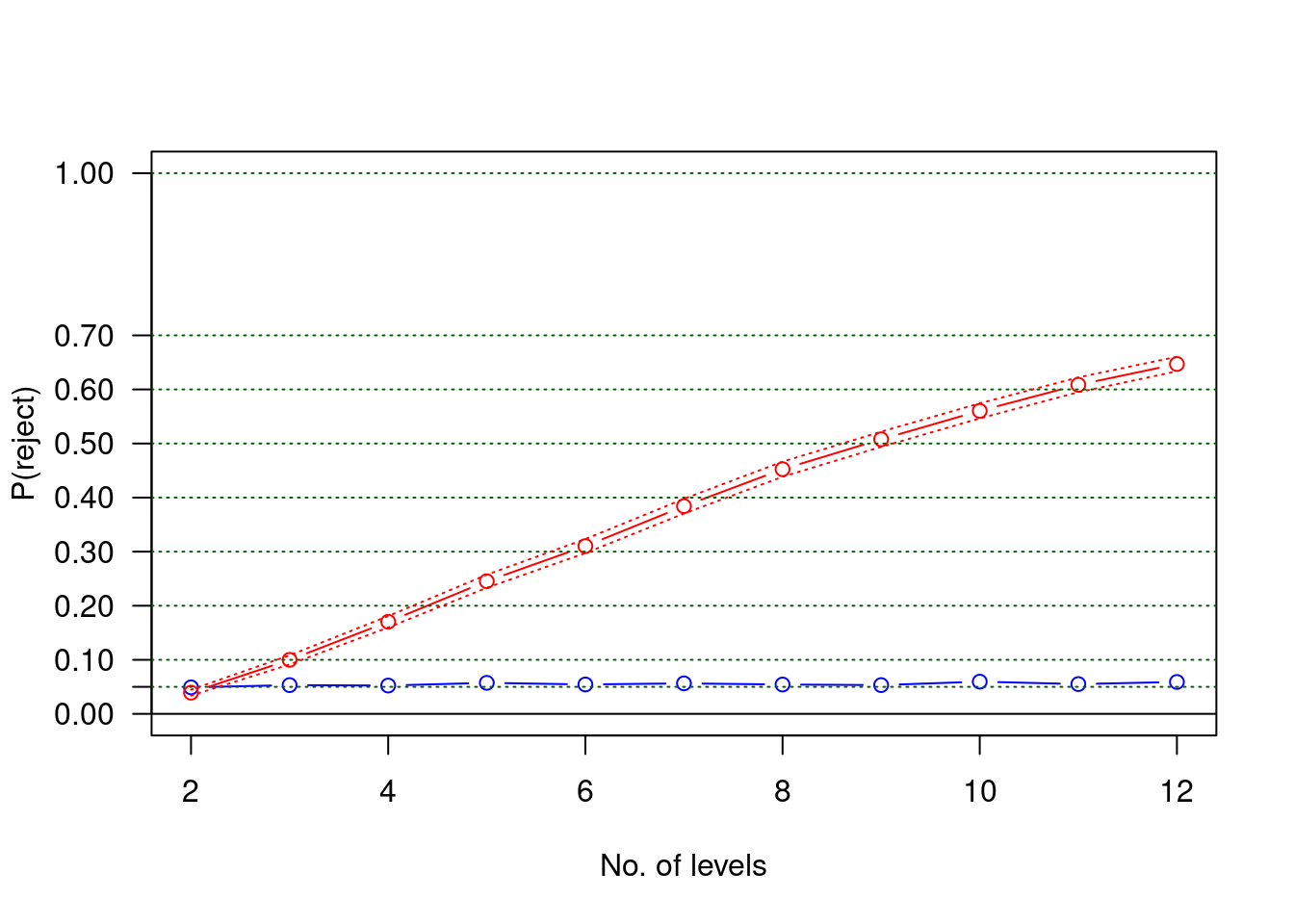 The correct procedure is to first look at the overall (LRT) p-value, and only if that is small enough, go on and examine contrasts, but concentrate on the effect sizes rather than (exaggerated) p-values. Formal procedures for doing this have been around for almost a century, so study the old masters (Fisher 1932; Holm 1979; Broström 1981, 1998).

The (simple) Holm procedure can be described as follows: For n null hypotheses, calculate the traditional p-values and order them in increasing order. Then start with the smallest: if it is larger than 0.05/n, forget the whole thing. If it is smaller, reject the corresponding hypothesis and go on to the next ordered p-value and compare it with 0.05/(n-1): reject if smaller, otherwise forget this and the remaining hypotheses. And so on, until a p-value is too large. Note that for each rejection, the limit is made slightly larger. This is the improvement (more power) over the classical Bonferroni procedure that Holm (1979) introduced and Broström (1981) extended to subset selection procedures (Sture Holm was my thesis supervisor 1978-79).

Finally some bad(?) news: This problem with multiple testing applies to all situations where more than one p-value is wanted, not only the case with one categorical covariate with many levels. There are two practical approaches to take: (i) Follow Holm’s rule as desribed above, or (ii) Regard p-values as ordinary statistics (they are), and give no probability interpretations to them, essentially, skip the stars. Do not test hypotheses about contrasts, satisfy yourself with the LRT tests. Ignoring these rules leads sooner or later to the territory where scientific fraud lingers. Most important is to have a research protocol, written before looking at data, stating exactly which hypotheses you want to test.

And, by all means, do not forget the subject matter significance.